Short history of the historical techniques used in our products

Short history of the historical techniques used in our products. 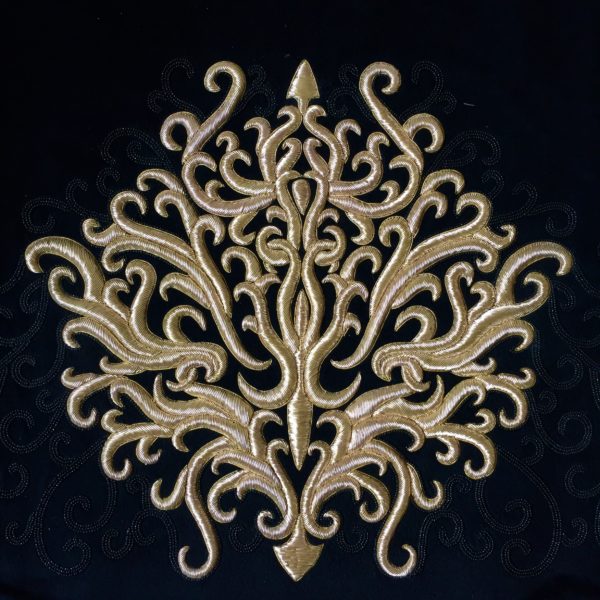 It is widely believed that goldwork embroidery originated in China from the 10th century spreading across the continents with the silk caravans, to Asia, Persia, India, the Middle East and Egypt. It also reached North Africa, Spain, Italy, Western Europe, Great Britain and  Scandinavia.

Throughout history, gold has been a symbol of status and wealth. It was used to decorate the garments of the important and noble people like the pharaohs, emperors, members of royalty and wealthy aristocratic families.

Goldwork is the art of embroidery using metal threads or wires. It takes very long training to master the skill and tens to hundreds of hours of work to finish a piece paying meticulous attention to every detail as the materials and stitching are incredibly tiny. Most of the time stitching is done through the hollow metal spirals and because of the heavy padding, the gold is raised in different levels.

Tambour embroidery originates in India from the 16th century. The technique involves creating a chain stitch using a long thin tool with a hook at the end and a wooden handle. These embroideries were exported to the Persian Gulf across the Middle East and eventually arrived in Europe in the 18th century where the technique would become known as Tambour Embroidery.

Tambour means drum in French and refers to the technique of stretching the fabric tightly across a frame to create the tension needed to embroider efficiently. Tambour embroidery arrived in the French town of Lunéville in 1810, and was adopted quickly by the ateliers due to the speed of the technique. It was used to imitate lace to start with, beads and sequins were added only from the late 19th century. The town of Lunéville became so famous for its exquisite embroideries that the technique is known as Lunéville Embroidery in France.

Nowadays this beading technique is still very popular and  widely used in haute couture fashion seen in catwalks of high end brands and fashion magazines all over the world.